Potsdam University, in the capital of the German State of Brandenburg, is gaining in popularity and that’s also reflected by its modern architecture. Recently, the university’s laboratory and maintenance building was expanded with a 12 million euro extension, cover 4,900 m². Here, arcon provided advanced windows and facade elements – which offer enhanced heat insulation and sun screening, combined with a decorative silk-screen motif to add an attractive design element.

Currently, roughly 3,400 students are enrolled at Potsdam University which was founded in 1991. It offers degree programs based on a limited admissions policy in engineering, social sciences and design. The latest construction project, known as “Annex 1,” now further enlarges the university’s working space. This new building was planned by architects from Becher + Rottkamp in Berlin, who emphasized the project’s sustainability. Here, a comprehensive, integrated energy concept was used: including advanced technologies to maximized efficiency and minimize the consumption of resources.

Key elements in this concept were the special glass products from arcon, headquartered in Feuchtwangen, Germany. Here, glass with a G-value of 27 % was produced for the building’s windows and facade siding, which also fulfilled the building’s ecological needs by offering sun-screen and thermal insulation protection. This sun-screen glass, known as Sunbelt Scandic 53/25 with its G-value of 27 %, offers excellent protection on sunny days by preventing overheated interiors while simultaneously allowing maximized light transmission of 53 %. As a result – in the summer, energy intensive air-conditioning systems are not required. And in the winter, heat use can be minimized thanks to the effective insulation of arcon’s special glass, having a U-value of 1.0 W/m²K, to retain warmth.

In addition, the glass used for the building’s cold facade was imprinted with a light-toned irregular pattern, giving the building an attractive exterior appearance. This printed pattern resembles the wipe technique used to decorate interior walls. “For the architects, it was very important to give the building a sense of depth,” explains Albert Schweitzer, the project manager at arcon. That’s why the glass sheeting was later coated on its interior surface with the arcon product: Sunlite CR 2. This special coating produces a mirror-like effect and thereby gives the viewer an improved sense of depth. The insulated glass used for Potsdam University was manufactured by the Hoffmann Glass company in Halle/Peißen, Germany and finished with additional coatings by arcon.

arcon glas offers a wide range of innovative magnetron coatings for all types of glass: from float glass to laminated glass, as well as colored glass and various types of single-pane safety glass. 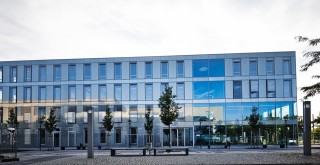 The university’s laboratory and maintenance building was expanded with a 12 million euro extension. 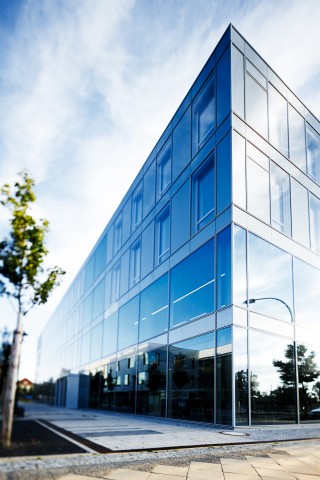 Key elements of the comprehensive, integrated energy concept were the special glass products from arcon. 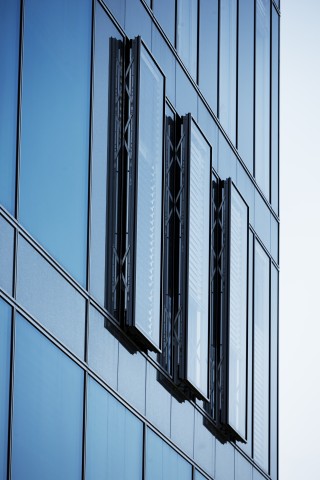