The Northern Chinese Leopard (Panthera Pardus Japonensis) is an endangered species. Worldwide, only 2,500 of these animals still exist. Seeing one of these leopards, face-to-face, is extremely rare – and practically impossible in the wild. That’s because these animals are only active at night and sleep in trees during the day. But there are a few zoos that do have these shy animals and since last year the Ree Park, near the Danish city of Ebeltoft, has become the new home for several of these unique leopards.

In the privately owned zoo, Ree Park – Ebeltoft Safari, on Jutland’s Djursland Peninsula these 1.5 meter long leopards can now be seen in a specially designed 1,500 m² enclosure. In 2012, this special enclosure for Chinese leopards was created to closely resemble the natural habitat of these big cats and also to blend in with the local landscape. Here, experts from the Carl Stahl Corp., Süßen Germany, went into action – creating a structure to envelope the enclosure, using I-SYS stainless steel cables and X-TEND stainless steel netting, which is nearly invisible, but fulfils all necessary safety requirements and the esthetic needs of this unique zoo. At Carl Stahl, the cable technicians are specialist in creating these types of zoo enclosures and offer a full-service program, ranging from the initial planning to manufacturing, delivery and installation.

Northern Chinese Leopards don’t demand much from their habitat. Then, the barren landscapes of foothills and alpine regions in Northern China are their natural home. But there is one thing that these leopards do need: Trees, as important retreat areas for these solitary animals, which provide both shade and living space.

That’s why 20 large trees were also included in the planning of the up to 6 meter high Ree Park enclosure – including special, highly flexible tree-rings integrated within the overhead netting which also satisfied the parks safety requirements. As a result, the entire enclosure was kept as low-key and unobtrusive as technically possible.

X-TEND netting – using specially designed, food grade, blackened stainless steel – is safe for both humans and animals. Plus, its subdued color also provides animals with a clearly recognizable, but impenetrable, perimeter. This black netting does not reflect sunlight and thereby allows visitors to see the leopards very clearly. As a result, the boundaries of the 1,200 m² enclosure are unobtrusive, being recognized unconsciously but also satisfying the safety needs of visitors when viewing wild animals.

“Carl Stahl did a fantastic job – creating an almost invisible zoo enclosure, that’s still strong enough to safely contain wild leopards,” says the zoo’s director, Jesper Staagegard. “With this enclosure, I’m always reminded of the story about “the king’s new clothes“ by Hans Christian Anders,“ adds Staagegard with a grin. Because in this case, having something that’s invisible is just what he wanted. And here, the customer’s satisfaction is clear to see, as well as the pride of the Carl Stahl Project Manager, Vito Gualazzini.

Still, doesn’t an almost invisible enclosure cause problems for these shy animals? “Absolutely not,” ensures Staagegard. “Otherwise we wouldn’t have chosen this type of solution. That’s because the animals’ wellbeing is our highest priority. Our leopards move around and completely ignore the visitors, giving people a fascinating look at the realistic world of Northern Chinese Leopards – and in complete safety.”

Visitors are Thrilled, Leopards are Unbothered

With a jeep, visitors at the Ebeltoft Safari can see and photograph black bears, giraffes, pelicans, cheetahs and many other wild animals. But the enclosure for the Northern Chinese Leopards is the highlight – due to its animals as well as its architecture. “Because of its unusual design, it is probably the most photographed enclosure in our entire park,” explains Staagegard. “And although the netting is hardly noticeable, we still get plenty of complements from our visitors.”

In addition, one of the basic requirements for the park was also to preserve the beauty of the surrounding landscape: its forest floor, springs and dense vegetation. Here, the X-TEND netting was hung from support pylons by Carl Stahl specialist and thereby satisfied three priorities at once: species-appropriate wildlife holding, animal welfare and visitor satisfaction.

To ensure the structure’s stability, the stainless steel netting used for the enclosure has a diameter of 2 mm and a gap width of 50 mm, which ensures the visitor’s easy viewing of the animals, giving them a “Safari Feeling.” And the netting’s support pylons were also carefully integrated with the surrounding trees.

Finally, another park specialty is the elevated visitors walkway, which runs along the outer edge of the leopard enclosure but blends in with the overall structure and does not impose on the animals’ retreat zones. The walkway itself is only supported by a few pylons and is hung from 16 mm stainless steel cables. This therefore also gives the walkway an unobtrusive appearance and complements the delicate character of the entire construction.

Wildlife Conservation as a Business Philosophy

Thanks to its progressive philosophy, the privately owned Ree Park has successfully combined wildlife conservation with unique visitor attractions, allowing people to see wild animals from all corners of the world in natural settings which are designed to resemble their original habitats. This ambitious goal has now been achieved and the Ree Park’s revenues are used to support ongoing animal welfare and species conservation projects. 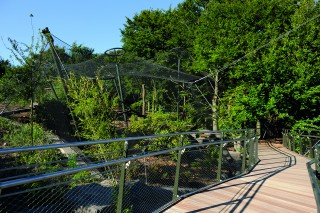 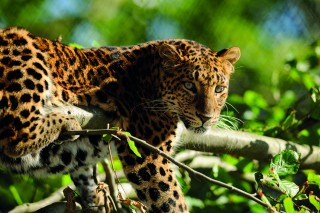 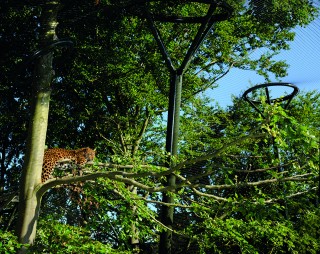